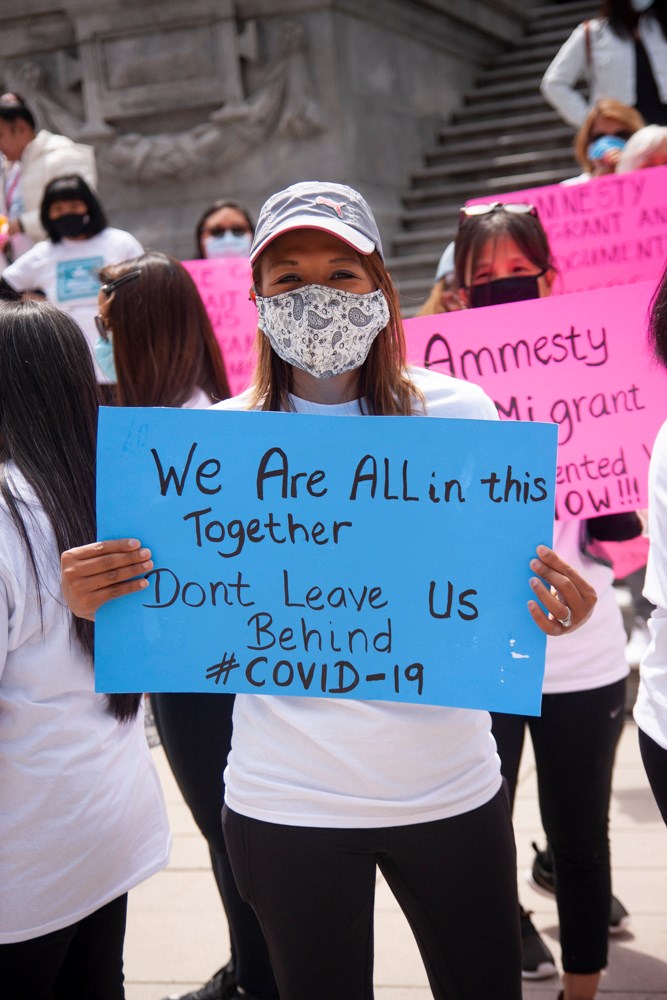 On 29 April 2020, MWC launched the Amnesty for Undocumented Workers campaign in response to the COVID-19 pandemic.

The campaign calls on the Government of Canada to regularize the status of undocumented workers by immediately:

These measures are urgently needed in light of COVID-19, which has exposed the extent to which the Canadian economy and society depend on migrant workers who lack permanent resident status and, as a result, lack access basic rights and services that Canadians expect.

MWC held a press conference to launch the Amnesty for Undocumented Workers Campaign on 29 April 2020. On the same day, MWC sent a letter to Immigration, Refugees, and Citizenship Canada (IRCC) Minister Marco Mendicino. The letter was endorsed by 26 organizations and 10 prominent individuals.

Read MWC’s press release for the launch of the Amnesty for Undocumented Workers Campaign here.

The following day, on May Day, MWC launched an email campaign urging supporters to email Minister Mendicino and their Member of Parliament (MP).

Since the launch of the campaign MWC has held three rallies, the first of which took place on 16 June 2020 in front of the Vancouver Art Gallery.

Prior to the rally, MWC held a webinar on 6 June 2020 with communications consultant James Infante, who led a training session on strengthening communication skills to build support for the campaign.

MWC organized a second rally on 21 August 2020 in front of Minister Carla Qualtrough’s office in Delta, BC. Minister Qualtrough is responsible for the Employment and Social Development Program, including the Temporary Foreign Worker Program.

On 9 October 2020, Migrant workers and endorsers of the Amnesty for Undocumented Workers Campaign hosted a digital rally: A Just Recovery for All. At the rally, endorsers discussed the progress of the campaign and approaches to advancing support.

Click here for a link to the digital rally.

Description: CBC reported on MWC’s Digital Rally for Migrant and Undocumented Workers: A Just Recovery for All

Description: MWC’s rally outside of Minister Carla Qualtrough’s office in Delta, BC, calling on the Government of Canada to take immediate steps to address systemic problems with the Temporary Foreign Worker Program.

Description: The Province interviewed MWC on defending the rights of migrant and undocumented workers. MWC is lobbying for greater protections for workers during the COVID-19 pandemic.